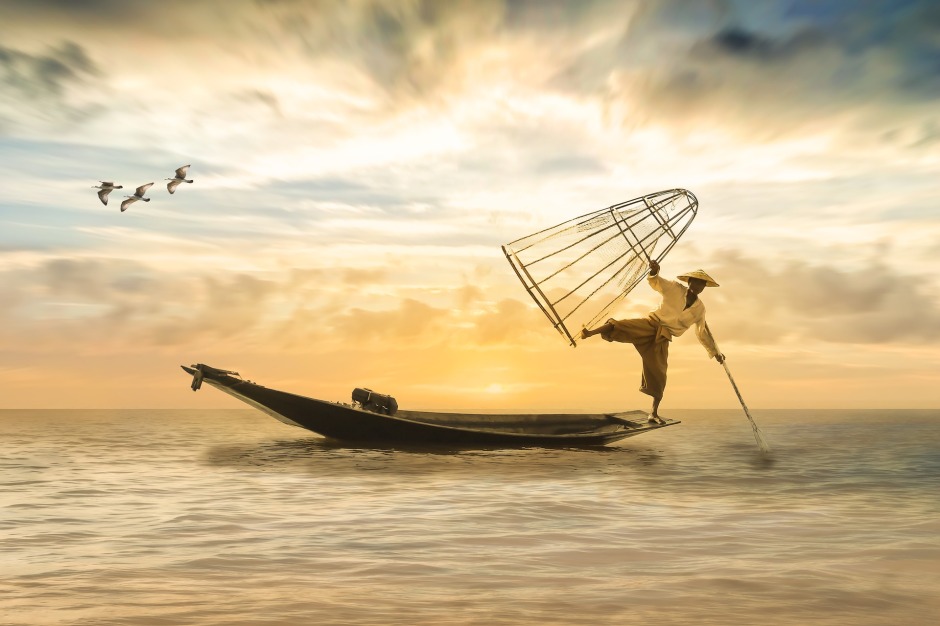 A scorpion crawls down the rope that holds the dangling box where a baby lies. The baby’s father tries to capture the insect, but the scorpion bites the infant on the shoulder. The sun rises as Kino, and his wife, Juana, take the baby Coyotito to the doctor. However, the physician refuses to treat the baby because Kino cannot pay. Juana uses a seaweed dressing on her son’s shoulder, and the remedy causes the swelling to subside.

Kino, frustrated over his poverty, dives for pearls that evening. On his last breath, a shimmer of light catches his eye, egging him to retrieve an oyster that produces a large jewel.

Soon, news of Kino’s treasure travels throughout the town and feelings of jealousy arise when he details plans for his fortune. That night, a thief attempts to steal the pearl, but Kino scares him away. Juana tells Kino that the gem is evil, but he disregards her warnings.

The next day, Kino tries to sell his jewel, but the pearl dealer only offers fifteen hundred dollars. Insulted, Kino argues that the pearl is worth fifty thousand dollars, and refuses to deal. Kino decides to go to the capital the following day to sell the nugget there.

As her husband sleeps, Juana attempts to throw the pearl into the ocean, but Kino follows and beats her. Soon, they find their house is on fire, and their canoe damaged. Juana watches as her husband staggers out of the bushes with a man whose throat he slit. Both decide that they must go away even if the murder was in self-defense.

The little family travels for days when Kino realizes a group of bighorn sheep trackers is following close behind. Kino hides his family in a cave. While the men sleep, the sudden noise of what sounds like a baby wakes them. After a hunter shoots in the direction of the cry, Kino kills all of the men. However, the call of death rises in the air as his son dies from the first shot.

Kino and Juana return home with their dead baby. Kino looks at the pearl and sees the image of his son’s head blown off, and throws the gem into the ocean.

The Pearl by John Steinbeck has lost its potency in modern day society due to the realization that an underlining lesson in the story is discontentment.

Pearls stem from a tiny grain of sand that permeates a shell. The mollusk wraps the irritant with layers of nacre, which eventually forms a bead. Likewise, discontentment begins with a subtle idea that grows into a feeling of unease.

Unhappiness abounds when we believe something is missing from our life that makes us feel unsatisfied. Dissatisfaction breeds annoyance, bitterness, and covetous behavior because we cannot attain what we think we deserve.  Thus, instant gratification is the nuisance to a peaceful life. When we have to wait for a change in circumstances, we grow weary and take matters into our own hands, causing us to suffer the consequences of rash decision making.

In contrast, there are many times when our need is genuine, but we must submit to God’s timing to fulfill that necessity in life. In Philippians 4:11-13, the Apostle Paul states, “Not that I speak from want, for I have learned to be content in whatever circumstances I am. I know how to get along with humble means, and I also know how to live in prosperity; in any and every circumstance, I have learned the secret of being filled and going hungry, both of having abundance and suffering need. I can do all things through Him who strengthens me.” (NASB)

Note that Paul (who sat in prison unjustly) could not aspire to contentment on his own; he needed to seek Christ to strengthen him while he waited for the Philippians to provide. However, he also understood that it was God who met his needs, and God who empowered him to persevere when he had very little.

In his sermon, “Contentment,” Pastor Phil Johnson of Grace Community Church, in Sun Valley, Ca., says, “Contentment is not an easy virtue to master. It is advanced holiness, accelerated spirituality, its post-graduate level sanctification. Contentment is not the sort of grace that comes pre-packaged in some standard dose, like a pill you can swallow, and then you’re done with that step in the Christian life. Contentment is something Christian’s are initiated into, and then you learn and master it through long disciplined and difficult experiences. Every turn of providence is an instrument of training to help us master the art of contentment.”

As the missionary from India, Amy Carmichael once said, “In acceptance lies peace,” therefore, before we can feel the relief of contentment we must change the way we think and ask God to help us persevere.