In January 2015, The Telegraph printed an excerpt of a book written by Jim Quillen, a former prisoner at Alcatraz. The article entitled, “My 19 Days in Solitary Confinement on Alcatraz,” (linked here) describes how the prisoner spent his days in isolation. It says, “Since total silence and darkness were to be my constant companions for twenty-four hours of each day of solitary confinement, it was imperative to find a way to keep my mind occupied. I invented a game simply to retain my sanity. I would tear a button from my coveralls, then fling it into the air, turn around in circles several times, and, with my eyes closed, get on the floor on my hands and knees and search for the button. When it was found, I would repeat the routine, over and over until I was exhausted, or my knees were so sore I could not continue.

Segregation and isolation were beginning to make me realize, however, that while these macho ideals were easy to maintain when there was hope, it was far more difficult to cope with the undesirable and traumatic world of reality once hope was gone.”

I woke the other morning to a dark room. An unusual noise seeped into my bedroom, and a chill hovered over my bed. I even thought I felt someone tugging my blanket. I waited, but nothing happened. I sensed loneliness and fear.

I wanted to flick on my light, but I didn’t. Why did I dread the darkness? Why did I need the light? I realized that I worried because I lay alone, occupied by the essence of the unknown.

As a society, we are terrified to be on your own. We flip on the car radio, plug our headsets into our phones, and leave the TV running while we do other things.  Noise fills the air, and we convince ourselves that we are no longer in solitude. 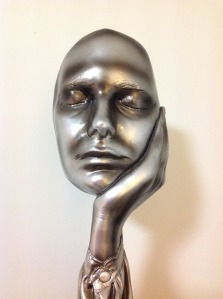 The Lord Jesus, available to people much of the time, left them, sometimes a great while before day, to go up to the hills where He could commune in solitude with His Father. Job, enduring his friends’ tiresome lectures and accusations, was very much alone on his ash heap, but it was there that he came to know God as never before. The old apostle John, when exiled to Patmos, must surely have known a holy aloneness through which he received the book of Revelation. Someone may complain that he has no one to talk to. Then thank God! Talk to Him!”

I never thought of loneliness as a gift. Unlike the prisoner of Alcatraz, who lost hope, and found the emptiness of isolation maddening, we have God. We can use those lonesome occasions to acknowledge the constant presence of Him in our lives.

Therefore, what is there to fear in being alone? God promises, “I will never desert you, nor will I ever forsake you.” (Hebrews 13:5 NASB) We need to see times of solitude as opportunities to find intimacy with God. If we focus on Him, we will recall his goodness, and then welcome him in the dark.

Romans 8:37-39 says, “But in all these things we overwhelmingly conquer through Him who loved us. For I am convinced that neither death, nor life, nor angels, nor principalities, nor things present, nor things to come, nor powers, nor height, nor depth, nor any other created thing, will be able to separate us from the love of God, which is in Christ Jesus our Lord.” (NASB)

2 thoughts on “Finding Hope in the Darkness”